From London to Las Vegas, the best places to indulge the seven deadly sins

Amsterdam is as notorious for its red light district as it is for its for its quirky, artistic and ultra laid-back attitude. Hordes of scantily clad women (and men) line the streets of the Wallen acting as a huge draw for punters and window shoppers across the globe to ogle or indulge their fantasies.

The city of angels; where fake boobs, big hair and compact noses are more commonplace than hot meals. From the glitz and glamour of Hollywood to the uber-chic boutiques of Beverley Hills, LA is the place where people spare no expense to look their very best.

From all-you-can-eat buffets to never-ending drink re-fills and all-night gambling, the Nevada desert town is the ultimate Sin City. With everything in abundance and no check on time it’s hard to stop.

A city of superlatives, Dubai boasts the most expensive, the biggest, the grandest, the tallest… of just about everything. From its super-sleek mall boutiques to its decadent hotels, be prepared for the green-eyed monster to rear its ugly head.

Where else can you indulge your food fetish than in the capital of haute cuisine: Paris. With secret street markets, bistros, cafes and restaurants aplenty, eating and drinking in Paris takes on a very new dimension.

Stand on the wrong side of the escalator during rush hour or walk slowly down the street and you’ll see a cloud of red mist rise above commuters’ heads. What’s more during the north London derby be prepared for friendly football rivalry to turn somewhat sour.

The locals pride themselves on their relaxed and laid-back lifestyle so you’d be excused for taking things a little slower here. From catching some rays on the beach to wiling away the afternoon in a hammock the most you’ll have to move is to flag down the waiter for another rum cocktail. 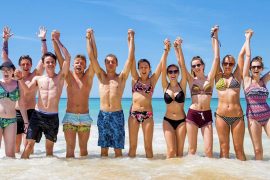