London Plunderground: The etiquette of the Underground

London Plunderground: The etiquette of the Underground 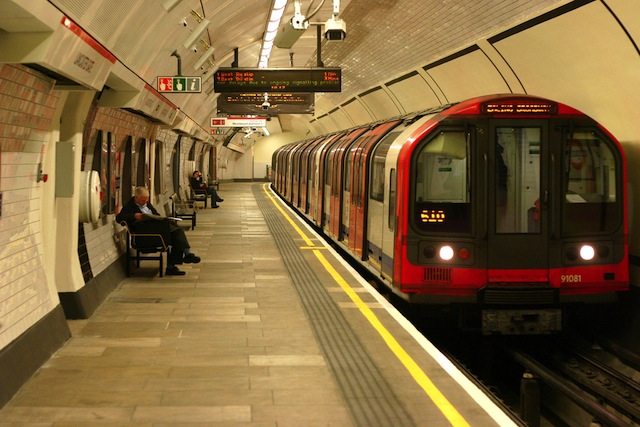 James Keogh gives us his top tips for using the London Underground and how to survive it like a local.

It is just past noon on an unusually sunny Saturday in Brixton, most pleasant given this otherwise bitterly cold month. As a Brixton local I must say there is no place quite like the melting-pot of Lambeth and I can’t help but smile to myself as I walk to the tube.

The tube is a different world to yesterday, the buzz and stuffiness of the working week has given way to more leisurely colonies of tourists and families with young children all eager to take in popular and “hidden” parts of the city and indeed today I shall join them.

This more leisurely commute may be more chilled out but why do all the tourists seem unaware of the Tube etiquette?

We have many nuances of ‘Great British etiquette’ and the Tube specifically has quite a collection of quirks. Although most of these things can be found signposted around, some are still unwritten rules and either way it is easy to see how tourists or first-timers could get caught out and face the British cold shoulder. So, with this in mind, I have decided to collect all the do’s and dont’s into one place for those who are yet to travel London’s Underground:

STAND ON THE RIGHT, WALK ON THE LEFT

As discussed you may or may not feel the wrath of your fellow travellers, mostly dependent on  whether it’s rush hour, but ending up the wrong side of the tracks will always attract some frosty  attention. In general watch out when travelling with large pieces of luggage at peak times for fear of  tripping up junior city boys as they dart to-and-fro late for a meeting! 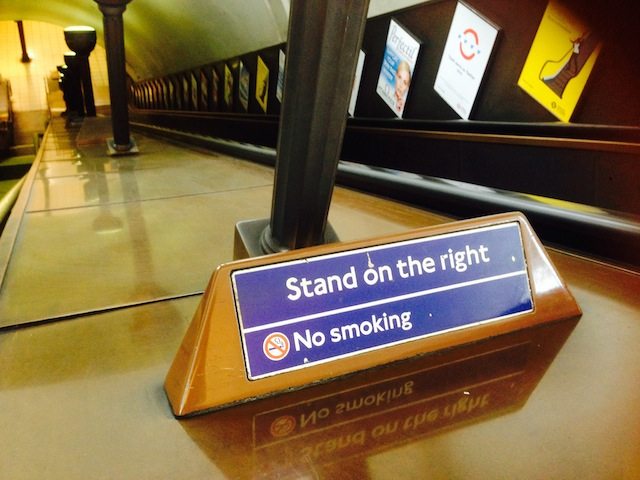 “PLEASE LET ALL PASSENGERS OFF THE TRAIN BEFORE BOARDING …”

…. the announcement rings. This is usually played over the loudspeakers on most platforms but  once at South Kensington I saw a Scandanavian man physically held back for trying to go against  the system! I have heard that many other European countries do not follow the same custom but be damned sure … we Brits take it quite seriously.

GIVING UP YOUR SEAT FOR THOSE IN NEED

This is surely followed globally as just an obvious piece of goodwill and respect but on many  occasions in London I have seen other passengers picking on the closest youth to reprimand them for their sloppy manners. However, this particular etiquette can prove quite tricky as some passengers may take offence at being labelled “in need”. For example, I once offered my seat to quite a glamorous and well-spoken elderly lady one evening but she declined and added rather dryly, “My dear, If I was not fit for the underground I would have taken a cab.” Quite funny really and a fair point, nevertheless it took the air out of my good deed and left me feeling a bit deflated.

No observation on British etiquette would be complete without highlighting the importance of  queueing. Whether it be for the oyster machines, getting on the carriages or just to get through the  barriers you will notice the crowd start aligning as if shuffled up by invisible channels. At this point  beware the red light! Whether you haven’t got enough money on your Oyster or have double  touched you will experience what it is to interrupt ’the Great Flow’. Check first and get comfortable  with The Way of ‘The Queue’.

Especially true during rush hour. It is a common thought shared amongst commuters that those who stop their motion, perhaps to consult the Underground map or read signs either immediately after leaving trains or on route to the  platform will inevitably end up with someone treading on their heels proceeded by a flustered and speedy getaway from the perpetrator. The Londoner’s hit-and-run method of most encounters on the tube is perhaps epitomised by this act. The answer is to keep moving, even if it means proceeding slowly one must be in motion at all times.

“COULD YOU MOVE DOWN PLEEEEEEASE?!”

In continuing with the theme of movement it must be made clear that at peak times a failure to  move down the platform or especially the carriages will certainly provoke vocal backlash. Remember – all people want to do at 8am or 5pm is get to work or get home and you WILL NOT delay this process for them, even though trains tend to run every minute or so!

Although the point will almost never be raised by fellow passengers it is of agitation to most when other travellers are listening to loud music or having loud conversation. I think this is perhaps to do with the fact that such noises exist in such close confinement and with the inability to escape this the  lack of control quickly gathers a repressed tension throughout the carriage. People may look at each other as if to say, “Are you hearing that too?!!” but nobody makes a sound – You can feel the tension  being lifted as sed ‘loud’ passenger leaves the carriage. This leads onto another point – there is no spontaneous socialisation on the tube. Or eye contact. Never.

The only time I have ever struck up a conversation on the tube was when I was coming home from giving a ukelele lesson and for the sheer novelty of my instrument I fell into conversation with a lovely American lady and her daughter, it was  such a great experience and whats more it was hilarious seeing the look on other people’s faces, it was almost like we were plotting to blow up parliament or something!

Note: interestingly this is not the same when using the trains. I have met many awesome people on journeys overground. Perhaps there is something about travelling underground that makes people particularly anti-social?

Now, I am a musician myself and – although I have never obtained one of the legitimate ‘busking licences’ – I have tried my luck once or twice setting up on the branded pitches and have always managed to hold my spot for an hour or so before someone notices. From this experience it is my whole-hearted conclusion that only tourists and foreigners throw money into the hat. The Londoner when offered a chance to escape giving will always oblige. At this point I would like to thank visitors to London for keeping buskers afloat, please don’t act like a Londoner on this occasion, you will never provoke negative attention and hopefully will encourage others to do the same.

So there you have it, a few pointers for successfully navigating your trip on the underground without causing too much offence. I would like to conclude with a little piece of advice for those of you, like me, who see their journey on the tube as a time to get a bit of reading done. Go for poetry or magazines rather than books or newspapers. Poetry is usually short and you can sink your teeth into a piece even between neighbouring stations and magazines have short articles like newspapers but they don’t open out as far as the Standard, Metro or worse still a Broadsheet. God forbid that you might infringe further on someone’s personal space anymore than your mere existence!

They always say, “Life is about the journey, not the destination,” and I am a believer that adventures on the London Underground breed memorable journeys in one way or another.

Previous postHow to visit Rome on a budget
Next postFrom Russia to the Silk Road: my journey on the Vodkatrain 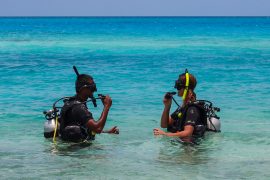