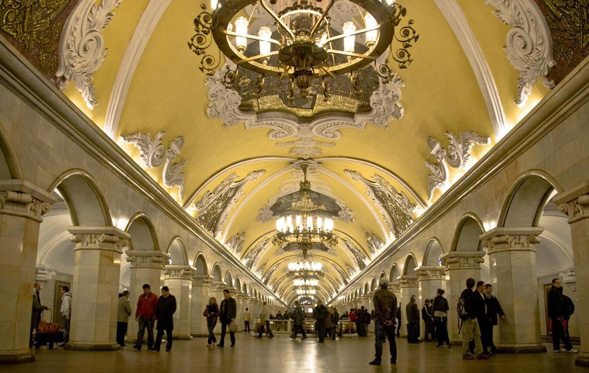 Incomprehensible station names, crazy interchanges and around 7 million passengers a day; taking the Moscow metro can prove pretty daunting for a first-time visitor to the Russian capital. But let’s be frank, this underground system is the mother of all metros. Its beautiful chandeliers, mosaics, sculptures and statues make it an attraction in itself. And it’s not all about its looks. The metro is also cheap (60 Rubles will buy you a ticket valid for 5 trips city-wide) impeccably clean and trains surprisingly run on time. Spanning almost the entire Russian capital it’s by far the best way to get around so here’s how to do it…

Get through the door

It may seem a little obvious but making it through the incredibly heavy doors without getting a broken nose is the first challenge. The constant piston action of trains pushing air through the tunnels creates some sort of vacuum meaning the doors swing shut so you’ll need to use all your force to push them open.

If you’re not familiar with the Cyrillic alphabet, its crazy shapes and symbols make reading the station stops pretty impossible, as they don’t tally with the English names on your map. Learning the language is obviously the best way around this but getting your hostel/hotel to write down the name of your destination in Russian should help you to identify where you need to go.

If you haven’t succeeded to learn the language (see above point) then you’ll need to revert to age-old sign language to buy a ticket from the kiosk. Tickets are either sold individually or in groups of 5, 10, 20 or 60 so use your fingers to signal how many you want. The price is usually shown on the kiosk window (thank god numbers are universal) so you’ll know how much to hand to the woman. Smile is not included.

At the bottom of each escalator there is a glass cabin and inside sits a woman. Her job is to sit there all day looking up at the escalator, monitor the comings and goings of commuters and make loud speaker announcements to anyone who does not obey the escalator rules.  She is usually fast asleep but even so, don’t look her in the eye.

Do not expect Muscovites to speak anything other than Russian so swatting up on a few key phrases  (such as “how do I get to Red Square?”) is invaluable for getting around. As in most European countries, the younger generation is more likely to have studied English at school so if you need help, try approaching someone who looks fairly youthful.

Keep your passport on you

Don’t be surprised if you’re stopped by the police and asked to show your identification. It is standard practice so don’t start blubbing as soon as they appear but you will need to produce your documents. If you don’t feel comfortable carrying your passport with you, a photocopy should suffice.

And finally… Take your time

With stained glass windows, Swarovski-dripping chandeliers and mosaics expounding the benefits of a healthy communist life, the metro stations are architectural marvels in themselves. Make sure you book in some time to simply go from stop to stop and gawp at the grand designs. You wouldn’t do that in London and New York now would you?

Have you been to Moscow? How did you find using the metro? Any tips you’d add to the above?

Previous postBackpacker Tips: Getting Tattoos while Travelling
Next postAsk the Backpackers: Travel Blogging

James W
Reply
I've heard so much about the Moscow metro - i have to see it! Great piece.

Simon P
Reply
I had no idea the Moscow metro was so beautiful! Sure beats New York's subway, which always smells like pee... 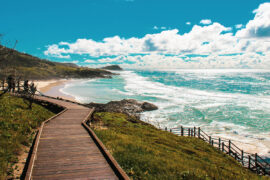 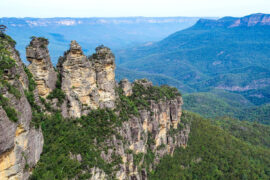